At the end of the first episode, you’re left wondering who’s having more fun, the ‘zombie’ actors or the ‘survivor’ contestants? It certainly seems that I Survived a Zombie Apocalyse’s cast – dripping in un-dead makeup – are having a fabulous time. It’s not every day you get paid to rattle fences, lick windows, jerking around, chasing strangers and getting some seriously gory face time. 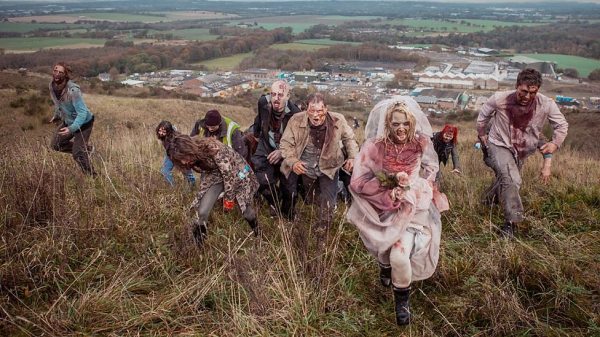 Zombies having a great old time.

Showing off her new date look.

Some of the survivors.

The ten contestants don’t seem to throw themselves in with equal gusto. Here they are awaiting rescue from a shopping centre compound in the middle of a 5G-generated end-of-the-world epidemic and all they can do is giggle about Spam and bedding.

Clearly they don’t understand the seriousness of their situation.

You can’t really blame them; after they arrive in the compound nothing much happens and they’ve got seven days of this stuff to sit out. No one dies in the first episode, which is a darn shame, as a grizzly guts-pulled-out-the-nose death might’ve shaken the happy comradery from their gobs. Instead, we’ve left with a joyful melting pot of lets-cook-pasta-togetherness (NB: TigerAspect should be congratulated for the almost ludicrous diversity of the ten humans who have managed to survive this supposed apocalypse, including a supremely efficient quota-ticking range of ethnicities, a transvestite bloke, an old lady, a man with a false leg and a transgender woman). 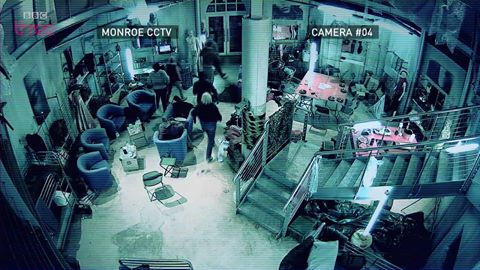 In fact, there’s so little action spread across the hour-long show that the majority of the shots are initially-awesome-latterly-yawn GVs of the meticulously dawbed, zombie-infested surroundings, close ups of actors’ gruesome make-up and great swathes of time-lapsed safe room footage. As it stands, this is a reality game show without any real games, only a few quick tasks (go fetch some bedding, barracade the door, let in the survivor) to break up awkward gaps – the second mission began forty minutes in.

The show is the offspring of zombie-shooting arcade video games, using similar grungy lighting, a fixed rig set up and graphic overlays which pop up with times, locations, zombie-position maps and contestant information. Each of the contestants is presented as a character, with established strengths and weaknesses. Lots of time is eaten up with their introductions, showcasing glowing footage of their pre-apocalypse existences to clash with the grittier CCTV feel of a 5G-infected world.

Radio 1’s Greg James is an intriguing choice of presenter, though at least he’s keeping it light. He never actually meets the candidates, instead operating as a remote host establishing a birds-eye context over which the audience must suspend their disbelief whilst he guides them through the not-much-happenings.

As a format I Survived a Zombie Apocalypse is interesting (a sort of Derren Brown’s-Apocalypse-meets-Release the Hounds), tapping into content trends – video games, survival, horror – which might appeal to a BBC3 audience. But what will keep them watching? The producers aren’t going to let their contributors die, and zombies aren’t even real anyway. The real challenge ahead is how to maintain a viewing experience which is authentic, creative and dynamic enough to keep viewers hooked. Bunk bed chats about corned beef won’t hack it.

Someone has to die.