Channel 5’s new venture into reality sees twenty members of the British public stripped of their smart phones, wrapped in furs and cast into the Stone Age for a two month ‘social experiment’.

This logline, emphasized through an aggressive marketing campaign, might seem gimmicky, but on the small screen its simplicity is both compelling and well-produced. Transported to a remote Bulgarian forest, the participants change into chamois and leather, before being introduced to camp – a quaint clearing with natural shelters, a pile of apples and a dead deer. Impressive, ex-Navy Seal and survival expert Klint Janulis initially guides the group, demonstrating basic skills and briefing the group on the ordeal that lies ahead, before leaving them to their own devices (crew, first-aid lady and blanket-provider excepting).

The cast comprises of a ‘cross-section’ of British society, in which the ten hapless women in various shades of L’Oreal Couleur Experte claim they have no specific skills, whilst the men macho-up and go Bear (thought whoever cast the vegetarian is having a laugh). It’s fascinating to witness the instantaneous gender divisions into primary-school textbook stereotypes – female faffers and gatherers / male farters and hunters – from the off, with the oldest man staking his claim for leadership. All are committed to the ‘social experiment’ but within half an hour of the first episode, the eldest woman is carted off with heat stroke and one of the younger chaps is struck by emotional turmoil.

Production-wise, authenticity is fundamental, which is why the process is dubbed a ‘social experiment’, allowing for inaccuracies and inconsistencies. So when disaster strikes and the furs get infested with maggots, the production team are on hand with woven blankets. Although this 21st century safety net will prevent hypothermia and death, the stone-age illusion and jeopardy is somewhat diminished and the viewers are left wondering how long The Eighteen will hack this experiential camping trip. The action has an on-the-ground feel, with crews wondering round the camp 24/7, capturing key moments and thoughts from the group. Although this places the viewer at the centre of the experience, the constant camera presence also puts the participants on edge, detracting from the fly-on-the-wall potential of watching individual narratives unravel. 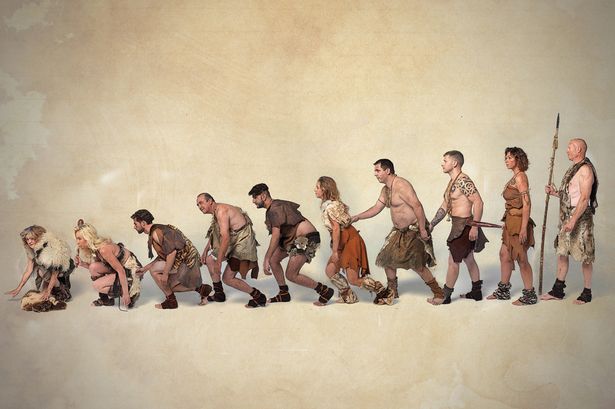 Overall, 10,000BC is an intriguing format tapping into the survival-zeitgeist, resetting and reworking the reality genre to focus on experiences over cash-prizes. Eighteen remain, and as the experiment continues, tiredness will infuse, hunger will gnaw, tempers will fray and inevitable drama will ensue.