I hope I wasn’t the only sofa’d muppet welling up as the final three bakers strode triumphant from the tent behind their precarious edible masterpieces, the culmination of ten episodes of whisking, pouring, beating, kneading, squeezing, sprinkling.  Greeted by the joy-filled shrieks of family, friends and former contestants, Nancy, Richard and Luis seemed war heroes, returning from an epic fight to preserve the very meaning of very Britishness.

Nestled into its new home on BBC1, The Great British Bake Off appeals to a very British patriotism; an Enid Blytoned, bunting-strewn idyll of laughing children, licking spoons and thumbing crumbs.

Compare the tableau with the modern urban reality of diesel-choked air, restless crowds, eau-d’armpit of public transport and calorie-counting facing the majority of the population, and it’s no wonder Love Productions’ escapism recipe gets the nation hooked.  GBBO provides an hour of endless indulgence, where cream-filled pastries, jam-layered sponge and buttery croissants magically puff up in a world where the grass is impossibly green, the sky impossibly blue and the focus impossibly soft. 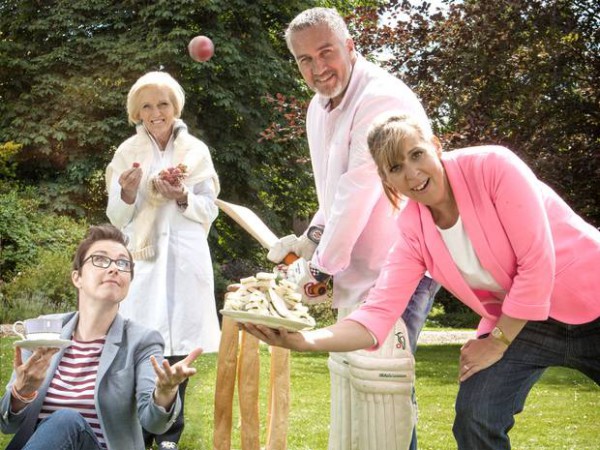 Attracting more BBC1 viewers than the World Cup Final (12.3 million vs. 12.1), the final episode was delightful, untainted by resentment, sadness or regret, the only twinge of end-of-Bake-Off disappointment manifesting in the drooping blade of Rich’s windmill.  The first star-baker of the show, Nancy was a worthy winner.

Despite moments of drama, Alaska-gate, Martha’s smiley sobs and a fair few soggy bottoms, the entire series ended in a beautifully satisfying anticlimax, showcasing the humble modesty and contentedness us Brits truly admire.  The final credits showcased the un-transformative normal-ness of charity bake sales, tea parties, grandchildren and tasty birthday treats to which each of the contestants will return, perhaps sweetened with the odd iced autograph.  A tear was shed.

All hail the emotive power of cake.

2 thoughts on “The Great British Bake Off”