4oD’s new ‘short shorts’ series are an indicator that broadcasters are finally turning their attention to producing ‘bite-size’ 2-5 minute long shows to compete with the megatron online channels like Youtube.  BBC3’s online offering has so far been restricted to comedy content, but 4oD’s venture explores a range of genres with varied success.

Here’s a brief look at a few of the shows; 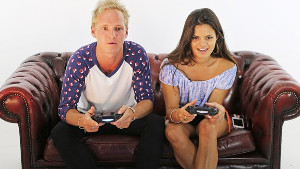 Presuming this series arrived in the wake of Amazon’s recent acquisition of Twitch, one must congratulate the development team for spontaneity. It’s a shame the content is rubbish.

The majority of the (in)action occurs on a cut-out sofa against a glaring white background, giving the effect of the players floating in cyber space. Shots of the players are interspersed with screenshots of game-play, while the celebrities natter on about nothing in particular.

Five minutes of my life has never been wasted less productively than watching Jamie Laing and Bip Ling attempt to play Lego Marvel Superheroes and Watchdog.

Educating Binky
Logline: Made in Chelsea’s Mark Francis educates Binky on the history of fashion through the eras.

Each three-minute episode begins with a short, conversational introduction into a particular fashion era (Victorians, 50s, Swinging 60s and Sloane Rangers) from ‘Markie’ to a wide-eyed Binky whose lack of historical knowledge leaves the viewer in a constant, aching eye-roll. This is followed by a speeded-up ‘make over’, where Binky is dressed and made-up in the fashion of the era.

Despite moments of exasperation, this series is actually pretty impressive; the production quality is high, with the characteristic MIC-branded soft focus and stunning, cosmopolitan settings making this series very watchable.

This slightly-above-vlog-budget vlog makes for great viewing. The ‘Epic News’ presenters, Peter and Chris, are self-effacing, savvy, and have a smashingly ironic humour, which highlights the absurdity of their subject matter, from how technology is enabling long-distance sex, to the ludicrous social-sharing of fitness progress.

With a catchy theme tune, psychedelic titles and cut-together clips from ads and viral videos all create an edgy, amateur feel which makes each episode fun and sharable.

Time will tell whether the short format will become a staple of our everyday television viewing, but it is clear from 4oD’s first forays into the viral realms that it is an space ripe for development.

The professional quality and the celebrity talent enabled by this major broadcaster makes for compelling content, while the short time-frame requires imagination, creativity and daring.

Perhaps ‘the short’ is the breath of fresh air needed to spur on the creative minds within the television industry to develop exciting new programmes for the online age.